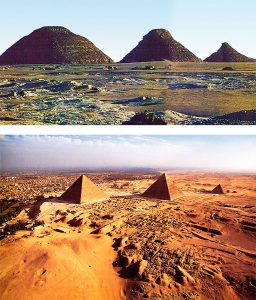 In an intriguing article, Prof. El Baz suggest that the three pyramids of Giza and the Great Sphinx were designed and built according to a similarly shaped model located in the region of the Kharga Oasis in Egypt’s Western Desert. El-Baz wrote that travelling through the Sahara one continues to be amazed by the sand dunes that are formed by the wind. Parts of the Sahara consist of 40% sand with pieces of rock and pebbles covering the surface, while sand dunes dominate the landscape. At a certain moment, El-Baz started wondering if perhaps the Ancient Egyptians had been inspired by these eroded cone-shaped mountains in the Sahara, fashioned by the wind (yardang, erosion of granite and basalt). To me this sounds debatable, because in that case I think the Ancient Egyptians would undoubtedly have opted for the cone-shape rather than the pyramid-shape. It is more plausible to assume that the three mountains in the cradle of their civilization served as a model for the tree pyramids of Giza.