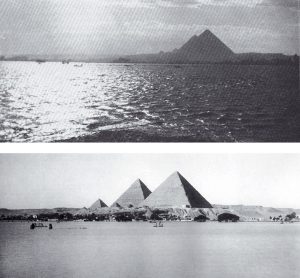 During the flooding season (Achet), the River Nile would overflow its banks and the water would get quite close to the Giza plateau. The view of the Pyramids of Giza with the water flowing at the foot of the plateau would remind the Egyptians of their original homeland, the cradle of their civilization. At the end of the four-month flooding season, the Osiris festival was held, keeping the memory alive of the God Osiris, who ‘was drowned’ in the Nile. Osiris to the Ancient Egyptians was the mysterious power that fertilizes the earth and creates new life where old life has perished and decomposed. The Osiris-religion was rebirth and resurrection personified, for man and for all flora and fauna. To the Egyptians, Osiris signified both the power of germination and the moment of seeding. The re-creation of their former Homeland on the Giza plateau was the re-birth of the Osiris religion. It was there that they built the ‘Island of Osiris’, the ‘Island of the Previous World’. The reason why the Nile must be seen as being inextricable linked to Osiris, is apparent from the fact that at the end of the 120-day season of Achet, the Ancient Egyptians commemorated the dying day, and the burial of Osiris and celebrated his resurrection. Nineteen days before the end of the Achet season, the festivities of the Osiris festival would start in Abydos. On the last day of the flooding season, IV Achet 30, they celebrated the resurrection of Osiris by erecting the Djed-pillar as a ‘supporting pillar of heaven’. On the first day of the next season, I Peret 1, they celebrated the ascension to the throne of Horus, the son of Osiris.