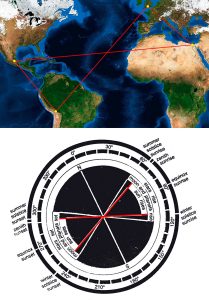 Earth globe on which marked in red the ancient cultures of Giza (Egypt), Stonehenge (England), Teotihuacan (Mexico) and Tiahuanaco (Bolivia) have been linked. The intersection of the connecting lines marks the navel of the Ancient World (Atlantis). We are living among the ruins of an archaic and antique structure, a grand structure whose function and meaning, built to last and understood by our ancestors, has so far eluded us. We did not even recognize the pattern marked by gigantic prehistoric architectural structures. After the submergence of the ‘Island of the previous world’ as a result of a world-wide catastrophe, the ancients wanted to leave to posterity at least four locations, four astronomical-religious centers, to last for eternity.